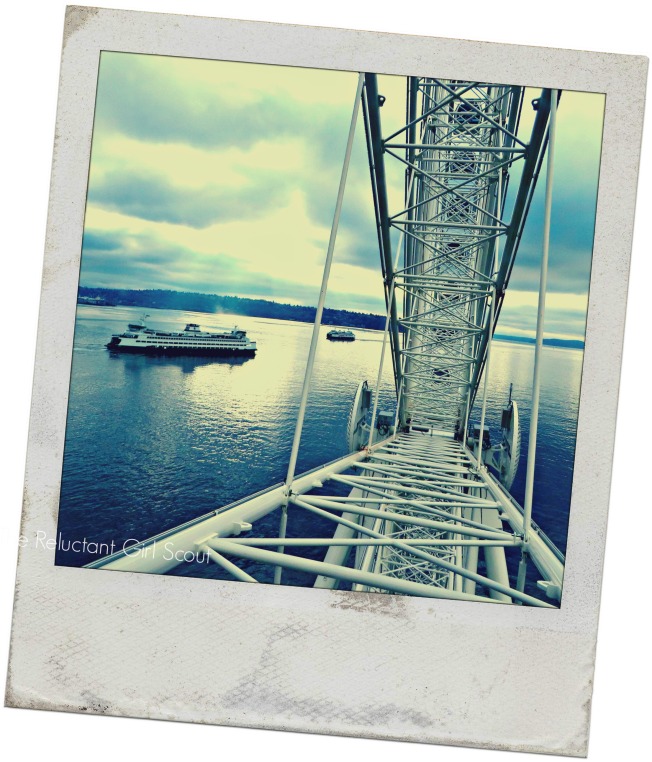 The thing about living on the edge of the country, far away from your people, is that when a friend comes to visit, it’s an event of note. In my case, when Chickpea phoned to say she had arrived and was out front, I ran out of the apartment, left our door standing wide open, opened the building’s door and raced down the steps to greet her. It wasn’t until the front door of the building slammed shut that I realized I’d left my keys inside.  Welcome to Seattle, Chickpea. Can I interest you in drive around town in your rental car until Z gets home from work?

Fortunately, the new maintenance guy broke his code and let us in when he saw us scratching at the glass, looking pitiful there surrounded by her luggage. He was gruff though. “I’m not supposed to do this.”

Chickpea and I met five years ago in the very first workshop of my MFA program. Because I’d read her workshop submission before meeting her—an essay on her tendency towards loudness—I was pretty sure I was going to loathe her. Excess sound annoys me. I have no idea why, when we can put people on space stations and every third person on a flight has on noise-cancelling headphones, we have yet to develop a silent leaf blower, for instance. I don’t need monkish silence, but I like quiet, and based on her essay, Chickpea and I were not going to be pals for auditory reasons alone.

I don’t know if any of you have recently re-lived junior high, but as a newbie in an MFA program, you’d be surprised how quickly you are transported back to the social anxiety and neuroses you thought you’d overcome when you were 13. For the first two days, I’d walk along the grounds on breaks, talking to Z, who was in Zimbabwe, so he could remind me of all the reasons the program was a good idea and all the reasons I should not bail prematurely. Fortunately, I’d packed multiple phone cards for this very purpose, though I knew how ridiculous it was that a grown woman would pace on the edge of Casco Bay, making repeated extremely long-distance calls to Africa for reassurance.  In retrospect, I’m glad for his gentle prodding for a variety of reasons including a lot more knowledge, a degree, and the opportunity to work with some great writers. But aside from that, I’m grateful not to have missed out on the unlikely friendships that developed there.

On the first day of my first workshop, I was anxious to see what Chickpea would look like. I had imagined her big and swaggery, entering a room with a shout and maybe banging a stick against a cowbell, so it was a bit of surprise that she looked normal and didn’t fill the room with extraneous noise. In fact, I can’t remember a single sentence that passed between us those first two days, but if someone in the workshop said something that smacked of the pretentious or that was too precious, she would look at me and make a face. Maybe just an eyebrow raised a millimeter. Before long, I was doing the same to her. Was it rude? Probably, though I had this sense that only we could see the faces we were making because they were so subtle. Was it juvenile? Oh, definitely, but it felt so good to suddenly not be alone in this literary endeavor. In those shared expressions I somehow felt I’d met a paisono, and this made me less inclined to bolt from the program. Within a few days, I was spending time with her and with her group of friends, with whom I felt similarly and strangely connected, despite the fact that they were over a decade younger than I was, and they were way more raucous.  It’s not that I’m incapable of making friends, but as an introvert and as a person who has always felt that old friends were just naturally superior friends, it was surprising how quickly these people mattered to me. The following year when I attended their senior readings and graduation, I openly wept. It was bewildering to me that people I had spent so little time with could matter to me so much.

When people visit us, I always mean to be an excellent tour guide. Seattle has a lot to offer, even when the sun isn’t out, but Chickpea and I were so busy talking about writing and relationships and things we hate and dogs we love, that the city seemed secondary. Sure, we went to the Market and to the Olympic Sculpture Garden, but we could have spent all that time in a booth at Denny’s if you want to know the truth. At least I could have. Sometimes out here I get a little lonesome for friends. Or rather, I don’t notice that I’m lonesome for friends until they are here and then I want to drink them up in huge gulps.

Summer before last, Z and I were away from the city for awhile, and when we got back, a giant Ferris wheel had been built on the edge of Elliott Bay. We didn’t know we’d been missing a Ferris wheel on our landscape, but then there it was, lit up like a blue and green Christmas tree when the Seahawks play a home game, and now it’s hard to remember what it was like before The Great Wheel was there. It makes the waterfront look a little less utilitarian and a lot more fun. Chickpea and I went up for our three spins around. Like all good Seattle tour guides, I spent much of the ride telling her all the things she couldn’t see because of the hazy sky: no Mt. Rainier, no Olympic range. Later, we would learn a pod of Orcas had been in the bay, so we could have been looking for those and enjoying what was in front of us instead of focusing on what wasn’t.

Chickpea lives on the east coast, so when I go home to Indiana, it’s not like she’s on the list of friends I’ll get to see.  When we say goodbye at the airport, it’s not like there is any schedule for when next we’ll be together, talking about the merits of Scottie dogs or why we loathe Joyce Maynard. Instead, we just have to be glad for the time we had together, make a plan for an exchange of our writing, and hope that not too much time will pass before we see each other again. Goodbye, Chickpea.

And then, a half hour later, the cell phone rings. Chickpea has missed her flight and if Z and I are inclined to fetch her, we get a few more bonus hours with her. We point our rental car in her direction and accelerate.

Leave a Reply to The Reluctant Girl Scout Cancel reply