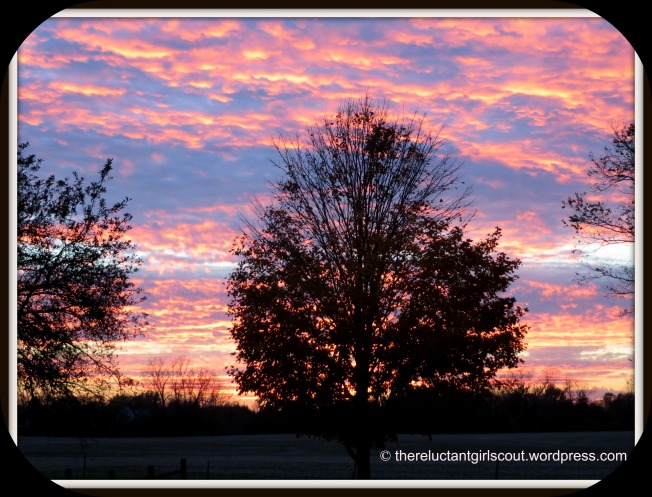 Sunset from my folks’ backyard.

This is how monogamous I am: I’ve had the same hair stylist since my first year out of college. When I met her, she was at the hippest salon in my little town, and whenever I was in there talking to her as the music thrummed and hair clippings fell on a groovy wooden floor that had been artfully painted, I felt like I was some place more exciting than my hometown. Friends would insist I should try “X” at some other salon because he or she was “the best”, but I’ve never really understood that mindset . . . that “new” is better or that having the most up-to-the-minute hairstyle mattered more than a connection I felt with the person behind the clippers. A few years later, my stylist left town for a while, so I had my chance to branch out and see what I’d been supposedly missing.  I now think of that as the Dark Ages. There were a host of people who were hard for me to talk to (my introverted problem, not theirs) and who seemed not to understand that I am basically a person who will forget to brush her hair on most days and therefore should not have a complicated or fussy hairdo.  One guy decided what I really needed was bangs, never mind I have only fourteen strands of hair that grow in that magical bang place, and it didn’t really matter to him that when I left the salon I kind of looked as if I was four and had cut my own bangs because he didn’t know me from Adam.

One day after what felt like five years of her absence but what was probably closer to two,  the “it” stylist of town (who randomly decided I needed to have hair like Sherry Stringfield’s on ER, mainly because there was an article about her in the People magazine he was reading right before my appointment), leaned over my shoulder and sang into my ear, “Guess who’s coming back to towwwwwwwwwwn!”

While I have embraced my new life in Seattle on several levels, there are other areas where I have not. I’ve been dragging my feet on finding a new dentist, I save chiropractor visits for trips to Indiana no matter how bad my back gets, I prefer using that Greek cobbler at home instead of finding a new one here, and since no one in Seattle really knows me (or notices if my roots are showing) I feel compelled to save hair cuts and coloring for when I’m back in Indiana. Fortunately, my trips are often enough that this usually works out. A couple of times when there have been long stretches between visits to the Midwest, I’ve gone to the Aveda school up the street to have some student practice his or her arts on my hair. The place fascinates me because it reminds me of Hogwarts, what with some students mixing potions and others doing intricate experiments on dummy heads. Plus, they are all whipping around in black and my imagination can easily turn black sweaters and tight pants into those excellent swooshy robes seen regularly on Harry, Hermione, and Ron. The Aveda school appeals to me because I never have the same stylist twice since there is constantly a new crop of students, and this makes me feel like I’m not cheating on my One True Stylist back in Richmond. I shall have no stylist before her.

One of the things that fascinates me about my relationship with her is that despite the fact we don’t interact with each other outside of the salon (give or take the odd text about Game of Thrones), we’ve watched each other’s lives unfold with joy and concern as warranted. I’ve seen her kids grow up via the latest snapshot stuck to her mirror and the stories she tells about them, we’ve had long conversations about marriage, pets, family gatherings, vacations, death and grief, our hometown, and various seasons of life. I called her the day after Z proposed because I knew it would please her. Yet, if we run into each other outside of the salon, it is a little awkward. I feel like I’m intruding on her private life. We share a few pleasantries and then exit each other’s company as quickly as we can. I don’t know how you classify that kind of relationship. Some people might say we aren’t really even friends and this is just a business arrangement, but it isn’t. The length of our acquaintance and the intensity of our talks puts her somewhere in the same orbit of some of my college friends, though I see her with more regularity.

The thought of finding a new stylist in Seattle makes me twitchy because I know I won’t find another one of her. You can’t duplicate people. Plus, I’m too old. People move around too much in this city.  It takes a lot of energy to get to know new people and I’m more tired now than I was when I was 22—how much genuine enthusiasm could I muster for a stranger’s engagement or first house or pregnancy? So I don’t look for her replacement. If I can’t make it back to Indiana to get my hair cut, I’ll probably just keep trying my luck at Hogwarts and hope that the stylist of the day isn’t from Slytherin.

That photo at the top may be confusing you at this point since it has very little to do with hair or hair care products. That’s because when I got started on this post, I meant for it to be about the superiority of the Midwestern sunset. My brain cells sometimes connect things like a Wild Mouse at an amusement park: just when I think the track is taking me one direction, there is a sharp turn and a drop.

In my earlier life, I noticed maybe ten sunsets. I wasn’t a total philistine—I’d see the sky oranging up in the west and I might think how lovely, but I wasn’t moved. The sun going down just meant it was about time for the evening line-up of sit-coms to start. And also, when you are young and from the middle bits of the country and you’ve never been too far afield, you’re basically required by law to assume that life somewhere near water or near a big city is inherently better than wherever your hick life is being lived.  You don’t even question this—it’s like it’s an inherent truth and doesn’t need empirical evidence.

Whether it was during her lengthy disappearance when I was forced into life with bangs or some other, shorter visit, my hair dresser underwent a life change when she went to Key West. I remember her telling me about it—how she’d realized how unimportant flashy clothes and jewelry were once she’d been in Key West because every night going to watch the sunset seemed like the most meaningful thing a person could do all day.  It was an event. The simplicity of it astounded her, and because it had meant so much to her, I began to realize how little attention I paid to the beauty of the natural world. And then, because I was twentysomething, my next immediate thought was not that I should enjoy that evening’s sunset but instead that I must move to a place where the sunsets are superior. I’d been living with my mother and step-father in a house in the country that is perfectly positioned between fields so I didn’t even have to leave my room to see a perfect sunrise or sunset, yet I was certain that ours were inferior simply because they were in Indiana.

When I moved to Seattle, my assumption was that the sunsets out here would be just the sort like those my hairdresser had told me about in Florida that changed her life. Give or take the Olympic Peninsula, we’re basically hanging out here on the coast and we’ve got Puget Sound for reflection purposes, so they were bound to be glorious, right? For months, whenever Z & I had a car or had made our way down the hill to Elliott Bay, we’d try to time it for the sunset, and we were regularly disappointed. Occasionally, it would be lovely, but the more frequent options were either a) gray so thick that there wasn’t much sunset action at all or b) a clear sky that meant it was literally just a round sphere that suddenly dipped below the horizon. Still miraculous, I guess, but it didn’t change our lives. We’d look at each other, shrug, and go get a milkshake.

It turns out all that dust and dirt kicked up by tractors and smog belched out by factories make the Indiana sunsets some kind of wonderful. It’s like a different movie is being projected onto a screen outside your house every night and tickets are 100% free. No two shows are the same and pretty much all of them are worth watching.  The one pictured above was an Oscar contender.

While I have little doubt that at some point I would have discovered the joy of this phenomena without aid of my stylist, I love that often when I see a particularly gorgeous sunset I think of her, think of her assertion that these are the things that should matter most to us because they’re more impressive than a new car, leather boots, or even an awesome hairstyle (bangs optional).