Puget Sound, the Cascades, and a view from the Boatyard Inn.

Last week Jane and I—from our respective homes 2,344 miles apart—sat in on a webinar featuring the blogger/writing coach Lauren Sapala that was all about transforming the “dragons” that keep you from your best writing and your best life. I’m a big fan of Lauren’s work with personality type and writing styles. (She has a description of what it is like to be an INFP writer—which is what I am—that brought me to tears because it so aptly explained the soup that my brain is when it’s trying to focus on a single idea to write about or trying to dish servings of that word soup up into appropriately sized and non-melty containers. It’s a mess here in my head, people. A real mess.) This webinar was exactly what I needed as I try to get myself out of what I can no longer call a “writing slump” as it is clearly now more of a lifestyle choice.

Can you see the slides? I can’t see the slides, I’d text. Jane would text back, There are slides? Where are the slides? My screen is just blue. It was nice being there—wherever “there” was—with Jane. One of the things I will never stop missing as I age is the closeness of friends from my youth. I miss being in each others’ space. I miss staying up too late and talking about love and life. I miss the dramas that now just seem ridiculous. So these moments of connection with old friends—even if they are now more often electronic—delight me.

Texting Jane during webinar lulls also gave me flashbacks to our shared college computer programming class, for which we were both ill prepared and bad performers primarily because our class notes were comprised of notes to each other about everything but class. It was also nice to have her along for the ride because over the years we’ve spent an inordinate amount of time discussing our own and each others’ personality types and quirks in epic emails to each other. We are ever hopeful that we’ll make some life-transforming discovery at some point. Instead we make small ones that we adopt for a time and then move on when we are not magically transformed.

Since I’d read nothing ahead of time about this theory of dragon-based writing blocks, I had some preconceived ideas about those that might be my most likely foes.

Dragons I expected to have:

Sadly, these were not the options presented. Sadly, it was clear from Lauren’s description that I had not one but four and a half of her dragons of writing blockage and none of them were all that funny or flattering.

Dragons I do have:

I’ve read a lot of medieval literature and a fair amount of fantasy, and by those standards, having four-and-a-half dragons to do battle with is a considerable challenge. Possibly one I’m not equipped for. Plus, I’m still struggling with the notion that I can be both self-deprecating and arrogant.

It’s that last one that I scored the highest on that I’m struggling with most. Don’t arrogant people walk around all day thinking they are the cat’s pajamas? I’ve never felt like I was the cat’s anything. I avoid mirrors like a vampire. I assume other writers are more prolific and more deserving than I am. The few days a year I dare to wear this huge, artsy ring that is made from a geode, I get embarrassed almost immediately and so turn the glittery bit toward my palm so no can see it and think I’m getting above my raising.

Were I arrogant, this is how I would expect to look. (Photo credit of Sundance Catalog)

I’ve spent several days since the webinar considering ways I might act superior. I DO think severe bangs are a bad choice for everyone. I DO NOT like it when people make Scottish terriers wear clothes. I DO believe I’m right in my criticism of ¾ of modern art. I feel strongly that you should use the Oxford comma. But is that arrogance or just some random opinions I’ve cobbled together over the years?

She offered some sound suggestions about vanquishing dragons and for that big ugly one at the end of my list, one of the best ways to beat down the arrogance is to recount your embarrassments from the past and just sit with that embarrassment instead of making excuses for why you shouldn’t feel bad or why it was really the fault of someone else that you made a fool of yourself.

In the interest of my healing and growth, I offer you a buffet of recent mortifications.

The next afternoon—after a leisurely Leibovitz Birthday morning in which we ate hummus and olives for breakfast because we didn’t want to leave the Puget-Sound-Snowcapped-Cascade-Mountain view to get real breakfast—I discovered that one of my favorite stripey gloves from the Sundance catalog was missing. I searched everywhere while growling my disappointment. The gloves were a gift and because I can neither wiggle myself into the gorgeous non-Midwestern-sized-woman clothes Sundance sells nor afford the home furnishings and other doo-dads they offer, these gloves were my one touchstone to the life I fantasize about living. That is, a life of a Sundance catalog model living a Sundance catalog fantasy life. A life wherein I am thinner and younger and have fabulous sun-bleached hair and look like I know Important Truths while I stand around in my textured Light and Love cardigan, my gauzy Mystic Meadow skirt, and some distressed cowboy boots that are new but look well worn, all as I stare into the distance where, no doubt, there is a palomino pony beyond the horizon that I have either just ridden or am about to ride.

Don’t mind me, I was feeling chilly and decided to take a hike draped in this hand-knitted blanket.

I don’t even know why I think I’d be happy in this life: I don’t like the outdoors much, horses make me nervous, I’m not a big fan of the American Southwest, and I’m pretty sure these catalog women are aficionados of salads and country music, neither of which appeal to me. But still, it’s a dream of mine and it was lost with my glove. 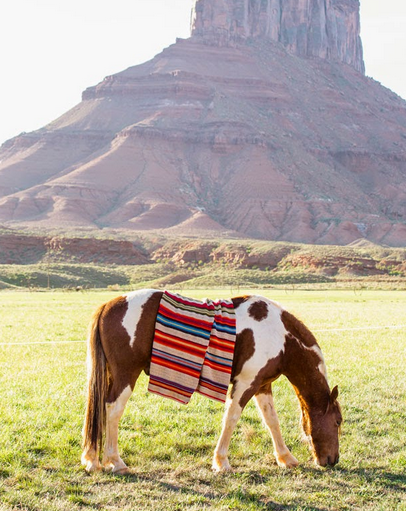 If I had this horse, it would help me find my missing glove. (Photo: Sundance)

Not a member of the hoi polloi. (Photo: Sundance)

Because of a three-day weekend and some projects that were started and left unfinished, some laundry done but only half put away, some “delicates” drying from hangers hooked over doorsills, some cooking experiments of Z’s that I enjoyed eating but had yet to clean up after, some wilted flowers from Leibovitz that were now neither beautiful enough to warrant display nor dead enough to warrant the trash, some bonus books to our already teetering stacks…because of all these things the house was not looking its best. Also, there was yet another mouse sighting and so Z had set up his Mouse Wall to encourage the mouse to stay in the kitchen and not skitter into our bedroom. (And no, Z is not a fool. He knows the mouse can scale the wall but he does it out of love for me so I will feel safer while sleeping, which is really all border walls do: make fearful people feel safer even though fences and walls often don’t achieve those goals and can be costly and unattractive.) Still, I thought, as I trundled off to bed, it will be easy enough to pick up in the morning while I wait to hear when the inspection will be.

Recently, I have been on an insomnia bender possibly caused by anxiety about a possible teaching gig after a three-and-a-half-year classroom hiatus, but more likely caused by some late night weed-free-but-highly-caffeinated brownies I’ve ingested. At 4:30, I was still not asleep, so I got up and took a sleeping pill. In the morning, I heard Z talking to the building manager in the hallway and I felt a little cross that they weren’t having the appointment-making conversation in her very tidy office downstairs instead of within my earshot so early in the morning. I sighed, settled in for more sleep, and then the bedroom door flew open and the light came on. I expected to see Z, but instead, it was the building manager and the handyman.

She and Z had not been chatting in the hallway. She and the handy man had been in the apartment checking our pipes for leaks and our smoke detectors for batteries. Z had been at work for hours. She skittered out of the house faster than the mouse skitters back under the refrigerator when Z swats at it with rolled up detritus from our coffee table.

To say I was mortified to be found in bed by someone other than Z at a 11 a.m.—to have been so zonked out from a sleeping pill that I didn’t hear the knock at the door or people in my home, to have been seen in my own personal bed by a woman I have heretofore only had benign conversations with about mouse infestations and her Yorkshire terrier—is an understatement.

This is the sort of thing that NEVER happens to those Sundance Catalog women.

Not the tidy and artful bed I was found in by the building manager. (Photo: Sundance)

I spent the rest of the day hiding in the apartment with the chain on the door and the curtains drawn. I wrote an Email of Agony to Jane to tell her of my shame. Jane’s house is always lovely. She would never have a mouse wall in a doorway or last night’s dishes in the sink. Jane would never be in bed at 11 a.m. But Jane is a good person and I knew she would not point this out to me, even if she did believe making me feel more embarrassed might help on the road to my ultimate self-improvement.

This is ONE WEEK’s worth of embarrassments. I can’t say I feel particularly good or unburdened about having told you any of these stories. But if I did have a Dragon of Arrogance? That thing has been smote.

Reunited and it feels so good.