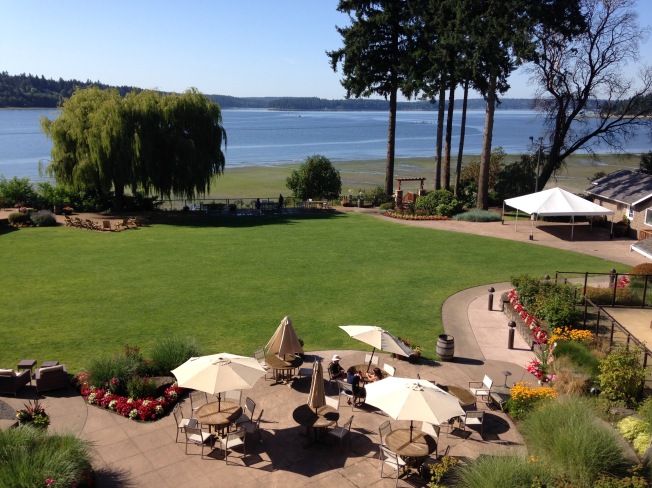 Z surprised me this weekend with an overnight to the Suquamish Clearwater Resort & Casino, which is a ferry ride away from the city and which was a delightful break from noisy, dirty, summer Seattle. We go there periodically on day trips for a little flutter on the penny slots and try our own weird ways to convince the machines to relinquish the dosh, but our systems are largely based on faulty logic and even faultier intuition so we never leave much richer than when we arrived and often leave $40 poorer. But this trip over was even better because he’d booked a room for us in the resort with a water view and we arrived with just enough sunlight left that we were able to drink it in.

I forget every year how sometimes it feels like the city lives right in the apartment with us when the windows go up: the bus idling, the dustups, the barking, the leaf blower racket all curled right up on the couch with us.

Earlier in the week I had walked to work and in the course of my journey passed three separate men who were talking loudly and angrily to no one visible—one of whom was the most pitiful creature I’ve ever seen, howling like the hounds of hell were coming for him—and, after saying a little prayer of God-please-help-them-find-peace, I marveled at how even if you have your faculties in tact and aren’t under the influence it’s a kind of insanity to walk past such people as if it isn’t happening, as if you are traveling in a triple-paned pod that somehow keeps you removed from the curses and the cries (and what I think was a three block rant about Jeff Bezos and how he’s ruining the city).

So I was glad to find myself looking out over Agate Passage Sunday evening. We watched an eagle that may have been nesting in a pine tree in front of us (or may have been a series of eagles that we wrongly referred to as “The Eagle” and “him”) and some sailboats. It was peaceful. Because we were inside—it was warm and mosquitoes were outside—whatever noises were out there, we were oblivious. I could feel the city lifting off of me.

We wanted to maximize our view, so we decided to stay in the room until the sun went down, which meant we missed dinner at the restaurants and had to eat at the 24-hour deli in the casino. And then we played our $20 each on the casino slots.

They did not pay out. They do about 10% of the time, and never in the big way we plan for them too. But still, we live in hope, which is half the fun—spending our imagined riches before we ever step onto the casino floor.

This is from a different casino, but this post was looking text-heavy, so here’s a fancy light and some sticks!

The next morning, I woke up early and while Z was still sleeping I sat on the balcony. No matter what I do on a vacation, I feel I’m doing it wrong. If I’m on the beach, I’m sure I’m missing a view from a ridge. If I’m reading a book, I’m sure I’m missing a heron or a certain shimmer of light. On Monday morning, it was no different. I wanted to write Jane because it had been too many days and I twitch if I go too long without sending her a recap of my week or my latest thoughts on the Enneagram, whatever I’m reading or watching, and the general state of the world. (Jane is very generous in acting as my journal. I need an audience.)

After forcing myself to sit there for several minutes, I finally determined I could write her while ignoring the screen and looking at the view in a sort of multi-tasking-with-nature scheme. I did with some success, and it must have looked appealing to the woman on the balcony next to me, because not long after I opened my computer she sat down her coffee, padded into her room, and returned with her own computer.

I described the view to Jane, thinking that would keep me rooted in the spot even if technology was sitting on my lap. I told her about the houses you could barely see across the water on Bainbridge Island because the pine trees are so thick, the rocky beach below where a couple of dogs were loping, the way the sky and land around Puget Sound is always pastel in a way that makes my heart do a little flip. This isn’t a view I have daily, and yet I feel I’ve been looking at it enough on our periodic jaunts for the last 13 years that this is the thing I would miss most if we ever left the Pacific Northwest. I would miss the palette here the way I still miss the clean line of an Indiana horizon at sunset.

The problem with me getting enraptured with beauty is that beauty and angst reside very near each other in my brain. So while I was looking at the expanse of trees and water and sky in front of me, I was also thinking about all the ways we’re wrecking the planet. I was thinking about the beautiful, historic photos of the Suquamish people—a woman with a basket, a group shot of handsome football players from the early twentieth century, a child in a canoe—that were hanging around the hotel. I had feelings about what was done to them and what the world might look like if they’d been left to their own devices and all the garbage the casino was generating that day alone and about the people inside who were maybe not sticking to the $20 limit that Z and I have.

I don’t know why my finger is in this photo or why it looks like a snapshot instead of huge portrait hanging above the desk, but this woman’s face is one of the most gorgeous and haunting things I’ve seen. I wonder if she would mind her image plastered around the resort.

It piles up on you, all the worries and ugliness, but the benefit of being somewhere lovely when you think about horrible things is that you can do some deep breaths, watch an eagle make a pass across the water, and push it out of your head for a time.

And I was able to do that until an older (than us) couple settled under one of the umbrella tables beneath the balcony. The be-hatted man bellowed across the lawn at another man, “Which way is north?” The man seemed not to hear him. The be-hatted man and his wife talked loudly between themselves about which way was most likely north as the wife pointed south and said she was sure that was the direction they hoped to locate. I considered yelling down to them but it was early and didn’t seem nice for the people still sleeping in the rooms around us, so I let them fumble with their map and ask a few more people, and then I began to suspect they didn’t really care about the direction they were facing so much as they enjoyed having something to talk about.

The be-hatted man yelled at a young woman walking nearby, “Nice earrings!” though it was unclear to me how he could see them. She dipped her head and touched her earrings and hurried into the lobby.

And then I told her that I thought those homophobes who are always suggesting “the gays” should be sent to an island where they could be with each other and not bother “us normal people” had it all wrong. It was the extroverts who should be sent to the island. They could sit at umbrella tables and drink Mai Tais and make loud small talk with strangers all day long. They’d be happier. Introverts would be happier. Surely that would be a win-win! 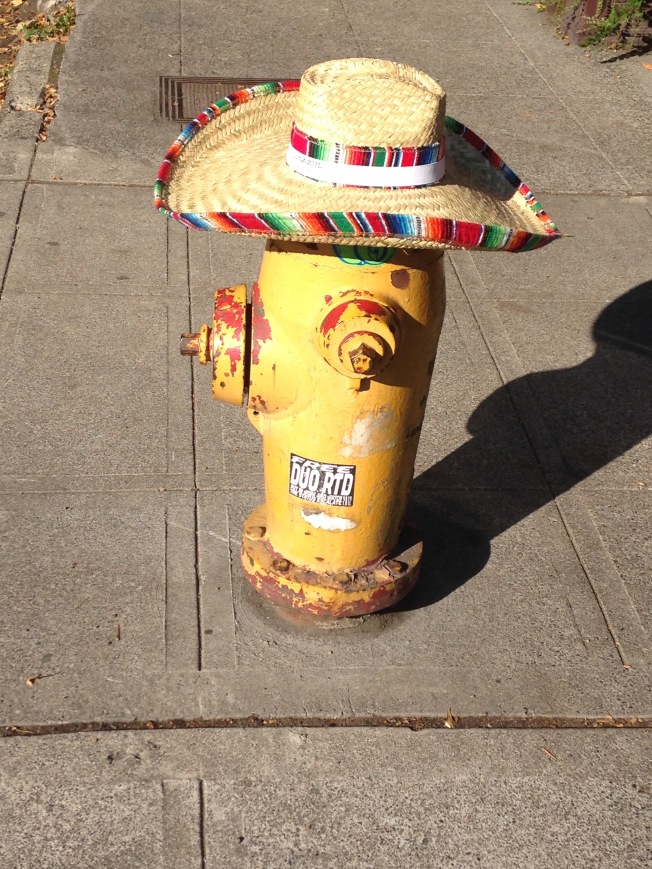 I feel certain the fire hydrants on Extrovert Island will look like this. Olé!

I’m sure Jane was thrilled to get my email. I’m always such a beacon of light and happiness.

Finally the couple left, Z woke up, we had some tea, and my mood re-brightened. We determined we didn’t want to leave and attempted to secure a room for another night, but the only one available was the $600 presidential suite and our bank account was not presidential. We decided to check out, eat breakfast, come back to the grounds we were overlooking and pretend we were still guests. We commandeered a table under a willow tree right by the water, and set up shop. Z did some work and called Zma. I worked on my too-long email to Jane and made a mental list of all the work I’d tackle when I got home when our mini vacation was officially over.

A family with too many ill-behaved kids showed up behind us, and I started type-grousing to Jane. I was particularly disparaging of their rat tail hair-dos and said “’rat tail’ pretty much tells you all you need to know about the parenting style of this family.” They were so loud. The father was bellowing playful orders at them as if they were in their own yard and no one else was around. I started to hate them more than the be-hatted directions guy.

I told Jane I thought maybe I’d hit an age when I was ready to start going to adults only resorts, but then I wondered would that mean we’d be surrounded by a bunch of single Millennials bent on hooking up? Loudly? Around us?

“I’m starting to think what I’m really hankering for is a retirement community,” I typed to Jane.

Then I looked back at Agate Passage, heard the eagle, and I’d forget to be annoyed by the Loud Others again. And then they left.

This is what I think is difficult in the city: there are fewer places of peace and beauty to distract yourselves with when the mongrel hoards are nipping at your heels. It is inspiring and exciting and fascinating, but when someone is screaming in your window you can’t do deep breaths, look at a spot of beauty, and forget that some stranger is encroaching on your peace of mind.

Z and I sat out there, inadvertently getting too much sun even though we were in the shade, for over three hours. It was so relaxing. At one point, the Rat Tail Boys returned but Loud Dad wasn’t with them, and they were talking quietly to each other about the bugs and rocks and bits of nature they were seeing like junior scientists. And I thought how lovey they were to be so interested in the world around them.

Those few hours on the green with the water lapping gently beside us were the best part of the trip and we weren’t even technically guests of the resort any longer. Maybe that was why it felt so sweet.

Maybe we finally figured out a way to game the system. 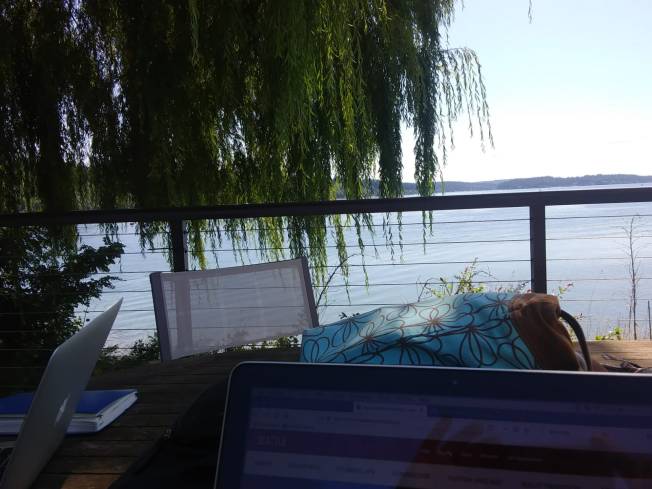 Not a bad office for the day.