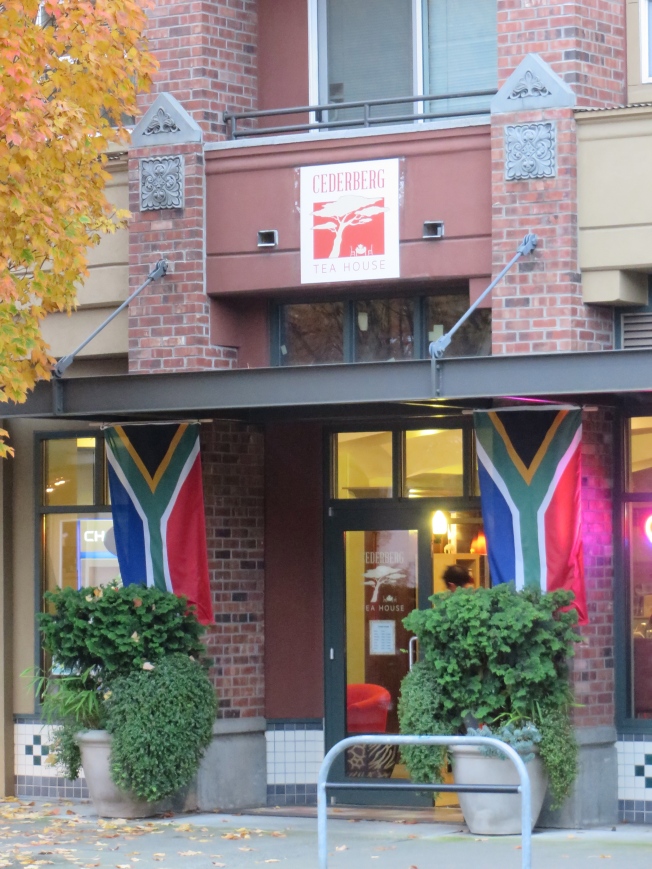 Sometimes on weekends Z and I get this awesome $9.99-a-day car rental from Enterprise because we’re “preferred customers.” The only time this is useful is in the winter when the tourists have gone away and there is a surplus of cars or when we are at the airport rental facility where we can zip into the preferred customer lane and by-pass the line of people, who are generally looking at us as if they hate us. (If I’m dressed well and can pretend I’m someone important, it bothers me less, but when I look like a hobo, I feel guilty because normally I’m just one of the poor slobs waiting in a tedious line right along with everyone else.) In fact, this summer right before we left for Zimbabwe, being a preferred customer was not helpful at all. We tried to return a car to a different location the day before we left to make our schedule a little less tight, and the preferred customer customer service representative basically said, “tough luck” and then had the nerve to ask, “Is there anything else I can help you with?” seemingly oblivious to the fact that he hadn’t helped me at all. Normally, I’m so sweet and placating to service people that I make myself nauseous, but because I was stressed out from packing, I had no sweetness to give this person in a call center in Dubuque who was not sympathetic to my plight. So I said very sharply, “Well, the time to help me would have been now, and you can’t seem to do that.” The thing about a cell phone is that it is not so satisfying to hang up as a phone with a cradle, where you can take out your frustration on a safe, inanimate object.

Remind me why I’m telling you this story? See, I just got all annoyed again and lost my train of thought. Okay. I think I’ve got it.

So Saturday we had a rental car simply because it was cheap, I had a baby shower to go to, and the whale bathtub that the impending baby was getting as a present from us would have been a pain to tote on the bus. After the shower was over, Z picked me up and we were both pleased that I’d scored a jar of peanut m&ms as a game prize and a jar of homemade jam from one of the hostesses, but we couldn’t figure out how to celebrate my winnings. We made no plans for the car beyond the drive to the shower. We weren’t ready for the day to be over, but driving around aimlessly seemed pointless. Fortunately, as we got closer to home (exclaiming over every red, orange, or yellow tree we zipped past), Z remembered that there was a South African tea shop that he’d been wanting to check out in Queen Anne.

We couldn’t remember the name of it or where it was exactly, and my semi-smart phone was dead, so we were flying blind. I vaguely remembered that the front of the building where it is was “kind of roundy” and Z was fairly certain that it was upper Queen Anne at the top of the hill. So we drove and went ahead and parked in the area where we thought it might be, and we were about to cry uncle and go to Chocolopolis, which looked promising. And then I spied the South African flags. Above it was this sign, with what might be the world’s most charming business logo. 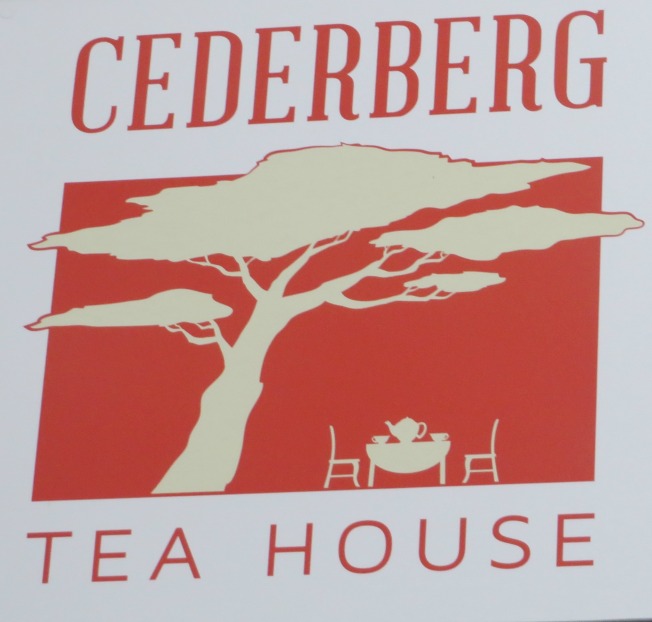 It’s worth noting here that I am about to commit one of the sins that Z hates. I am about to talk about being reminded of Zimbabwe and tasting the flavors of Zimbabwe and feeling a little like we were home in Zimbabwe. As if Zimbabwe and South Africa are the same country. They are not. They have their own cultures and customs and foods, but some of these things have been adopted or shared so for our purposes, let’s pretend they’re second cousins anyhow.  (And word to the wise, if you ever talk to Z in person, be sure to let him know how clever you are and that you recognize there is no country called Africa, that you fully recognize it as a continent containing diverse sets of people. He’ll think highly of you for making that distinction!)

In a land of coffee houses and no southern African food, Cederberg Tea House was a real treat for us to stumble upon. Rick often misses the tastes of his “real” home and goodness knows, if it’s not Pop-tart Surprise, I can’t duplicate it.  The shop was inviting. There was a good bunch of tables and chairs, plus the requisite sofa and overstuffed chairs by a fireplace. Photos of African animals lined the walls, and there were even two stands that displayed various specialty items that I’d been looking at with some regularity with Z-ma in Harare. (Who doesn’t want Eat-sum-more cookies?) My favorite thing there though was a collection of Origami African animals that had been folded out of animal print paper. Adorable. 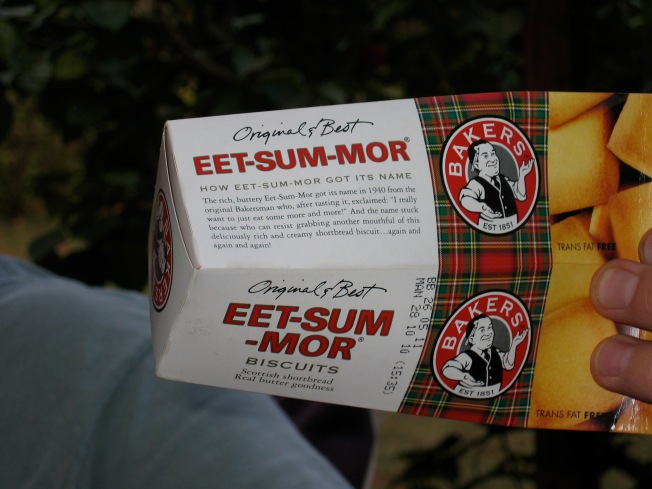 The South African woman who runs the shop with her parents and her husband greeted us warmly even though it was close to closing time.  She recognized Z’s accent and so they talked briefly about home while I peered in the case at the koeksisters and melkterts. We ordered a pot of black  tea and then listened as other customers came in and the woman explained to them the variety of teas they had and their special concoction that makes a sort of tea espresso.
Our pot of tea came in a groovy pot on a contemporary tray. A delicious butter cookie each rested on the doilies under our very modern cups. In addition, we’d each ordered a koeksister.

The verdict? Delicious. The tea was good. We personally think Z-ma’s koeksisters are more delicious and certainly we appreciate that she presents ours to us in a plastic tub filled with multiples of the little syrup-soaked pastry twists, but these at Cederberg Tea House were a very, very close second, so we were not complaining.

We stayed longer than we meant to, making comparisons and reminiscing about our time in Zimbabwe last month. We studied the menu to see what we might get next time (sandwiches!).  It was a bit of unexpected fun that our rental car drove us to this weekend, and I think it may get put on the “things our guests should experience” rotation, since most of them might not have a chance to go to southern Africa. You really shouldn’t have to live your life not knowing what koeksisters taste like.

P.S. You should visit their website and read on their blog about the contest for their sign and how it went missing: http://cederbergteahouse.com/