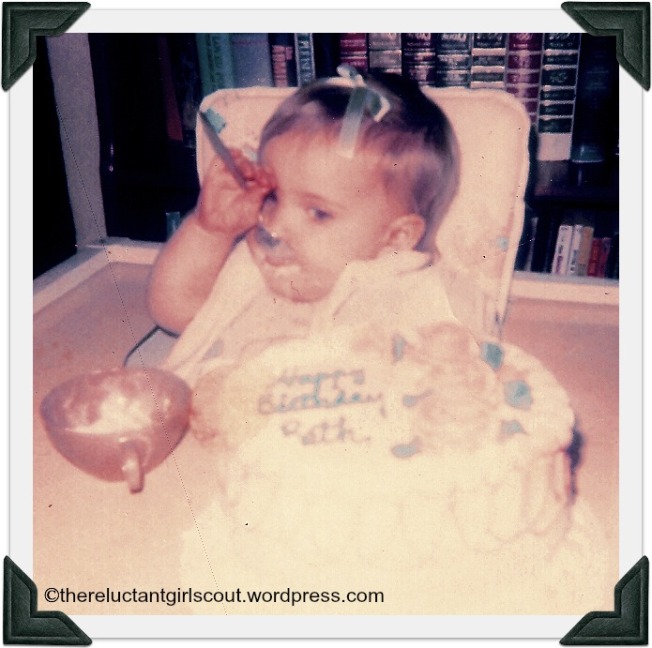 Yours truly, age one.

Last May when I was in a pet store with my half-brother and his family, my three-year-old niece Bridget and I were perusing a rack of pet-themed cards when she decided she wanted to find her daddy. I was so engrossed in the photos of pug dogs in lipstick and feather boas that I said, “Okay. He’s over by the fish” without once thinking maybe a three-year-old should have an adult escort. A few minutes later my brother came up to me and said, “Um, have you seen my daughter?” Panic. We found her a few seconds later midway to the fish with her face pressed against an aquarium full of gerbils, but I momentarily felt like the world’s worst aunt. So maybe it’s not surprising that I’ve been having such a good time in Indiana that I not only forgot to write a real post, but I also forgot that my baby, The Reluctant Girl Scout, turned one-year-old on the 18th. She’s twelve months old and walking and talking and I totally forgot to commemorate the moment with a snapshot. Oops.

I like to think if I had an actual human child I wouldn’t be so forgetful—failing to celebrate its birthday, leaving it in its carrier on the trunk of the car as I drive off down the road towards some exciting destination—but one has to wonder.

It’s hard for me to believe that it’s been a year since the Xanax Safari to Zimbabwe inspired me to start this thing. My optimistic self thought I’d post every day and so at the end of the year I’d be sitting on a heap of posts and the whole world would be reading me; my pessimistic self thought the likelihood that I’d forget to post at all once the trip to Africa was over was high. So the reality here that I’m still writing but somewhat less frequently than I meant to is both cause for celebration and regret. Though in my defense, there are a lot of non blog-worthy days when I’m just sitting around the house wondering if there’s a better way to organize the plastic bags under the sink.

The three weeks in Indiana have been excellent. The first two weeks we were staying with my beloved Scottie Fairy God Dog, Mac, at his beautiful house while his parents were in Norway. I’ve been staying at this house with Mac and his Scottish predecessors since I was 18, which is to say, a whole lot of years. I love the house, an L-shaped ranch that is situated on the wooded property in such a way that it feels very, very private and remote even though it is in the middle of town and there’s a Famous Recipe Fried Chicken less than a quarter mile away.

When you’ve stayed in someone else’s house for such a big part of your life, it is strange how it gets woven into your fabric as if it were your own. I’m not really talking about ownership of the property or the things inside but the place itself.

It’s the perfect house for entertaining, and with Mac’s parents’ blessing, I’ve done some entertaining there. My extended family has been there enough in both sunshine and in shadow that they think of it as my house (and Mac as my dog) and periodically we have discussions about whether, should the owners ever sell, we should pool all of our money together and buy it so we’ll continue to have such a peaceful, lovely place to gather.

Over the course of a few decades, it’s remarkable how many life events have unfolded there: affairs of the heart begun and ended, friendships begun and ended, baby showers and wakes, family reunions, phone calls both joyous and devastating, holidays, a trip to the ER after a fall through a screen door in the midst of what seemed like a promising date. (Oh, fortuitous, fortuitous accident.)

Lately, whenever I stay there, I’m afraid it will be my last time. Mac is no spring chicken. His parents threaten to move west permanently. I live on the other side of the country now, so my schedule and their vacation schedule aren’t always in sync.

Mac on his evening constitutional.

When you are living your life at 18, you think it will always be exactly as it is and you rail against it. You fail to enjoy fully the bounty (of someone else’s gorgeous house, of friends and family, of little dogs and gray cats) in front of you because you yearn for your own adventures, your own houses, in places far away. And then you wake up in the middle of your life and realize that nothing is static and maybe you should appreciate that view more, rub the Scottie dog’s ears a few more times, take a picture of the crane about to lunch on a fish in the pond, be grateful for each visit with friends, each dinner with family, any chance you get to be in a place you love. The birthdays that come unbidden.